For Merville, losing Snow was something she hadn’t been prepared for. Who thinks they might lose their husband after only a few years of marriage?

“As the time went by Snow’s health wasn’t so good. He had an enlarged heart and thought he may have to give up work. He talked of building at Colac Bay and living there. We had been to Colac Bay for the weekend and went down to the beach. He just sat on a rock and looked at the sea. When I asked, he told me he was having his last look at the sea. Of course I didn’t take much notice but remembered afterwards.

“On the Monday he stayed in bed and at five o’clock I got the doctor to come and he ordered him into hospital. I took him to the hospital and went home and we all went to bed and asleep. Tom McVicer from down the road came knocking about eleven o’clock and woke me up. He said the hospital was trying to contact me so took me down to his place. They wanted me to come to the hospital but I was so dopey and half asleep that by the time I understood what they were saying they decided it was too late.

“The hospital had rung Hewletts but their phone was in the sitting room with the door shut and they slept in the back bedroom and hadn’t heard it. Mrs McVicer worked in the exchange and she knew what was happening and Ton took names of people I would want to know and of course they knew all the Ashby’s and she did all the ringing. I don’t know how I would have managed on my own. Seven o’clock the next morning Frank (Snow’s brother) was at the door.

“People started to appear. Pearl (Snow’s niece) arrived and cleaned all the windows. Then Grandma Ashby, Ollie and Dorrie (Snow’s sisters) arrived from Dunedin with a black dress and beads for me to wear. It was hard going as I was worried about the kids but everyone seemed to think I should spend time with them. People were great. I had no worry about food as there was plenty of everything. The day of the funeral Grace (sister-in-law) took the kids to Gore and looked after them. The RSA looked after the funeral and Snow was buried in the soldiers section. 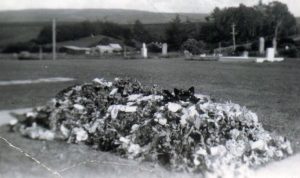 “My mother stayed with us for a short time (2 days) after the funeral but Minnie (Merville’s sister) told their mother she was needed in Winton to milk Eric’s (brother) cows. Janet’s birthday was two days after the funeral and we went to Pearl’s place for afternoon tea.

“The Paper Mill sent me one hundred pounds as Snow had worked for them for several years. I bought the piano with that.”

Mum once said the doctor had told Dad he should stop work. Dad agreed, but with the proviso that he would work until Christmas. I hadn’t put together the timeline surrounding Dad’s death before. It happened much quicker than I realised. Apparently we had spent the weekend at Colac Bay. Monday he felt unwell with Mum calling the doctor late afternoon. He died very early hours of Tuesday morning.

If you'd like to purchase my books, you can do so from one of these great sites: